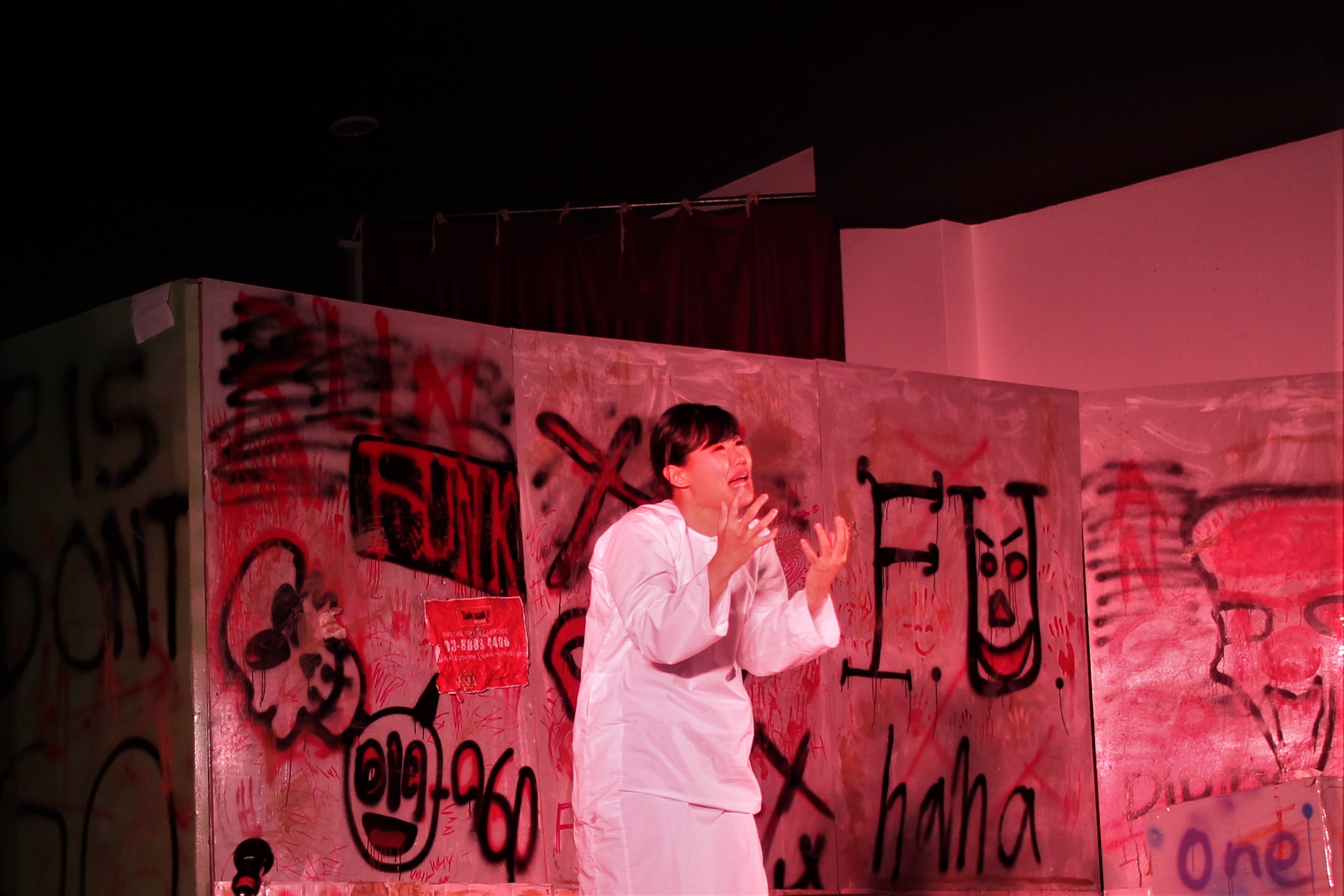 Sheryl Ho Xin Yi, who plays Aduni, depicting the madness within the character. 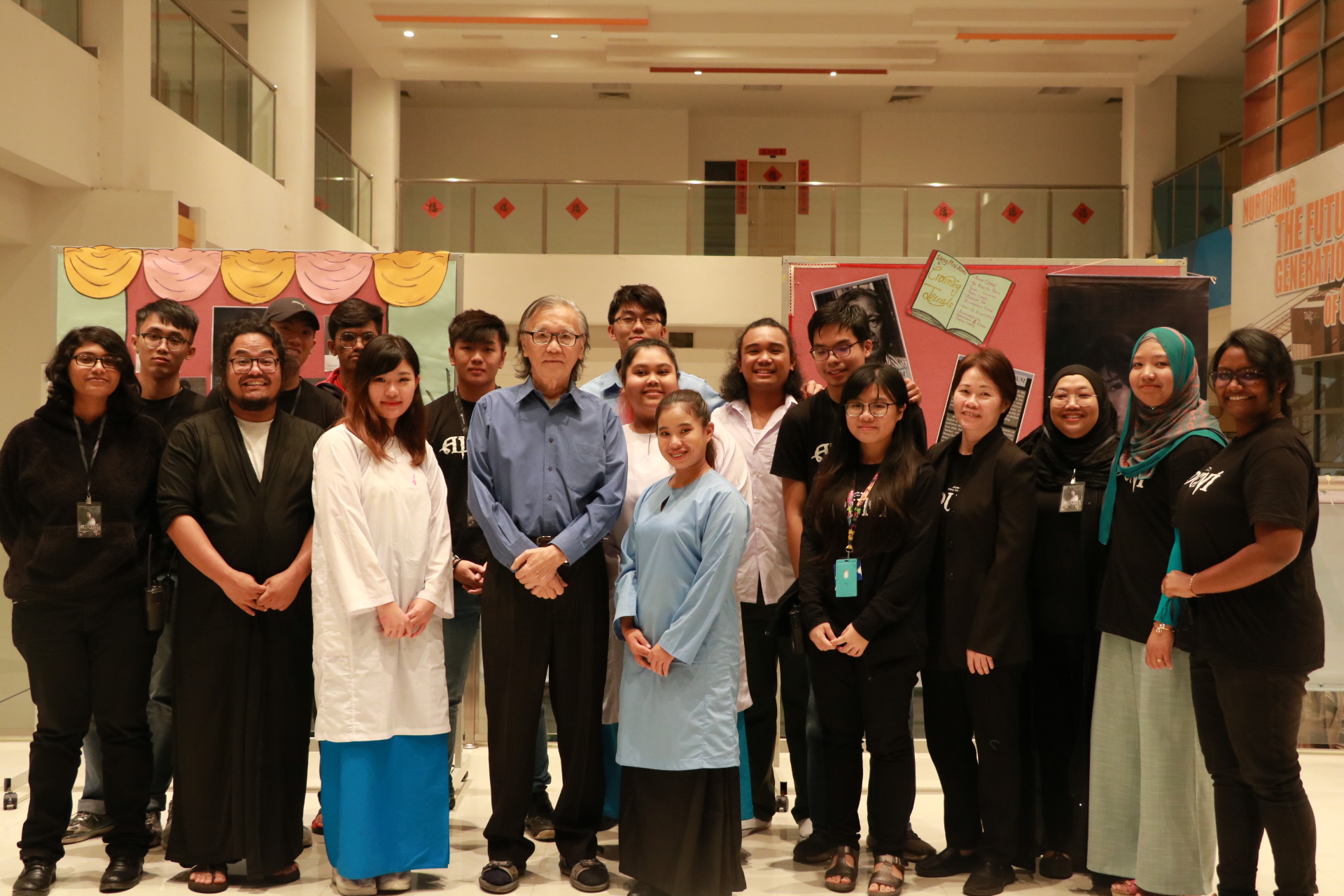 The entire cast and crew of the Aduni theatrical production team with the playwright, Mr Wong Phui Nam (front row, in blue)

Haleela Haizar Syed Haizar (right), a Diploma in Mass Communication student as Kuntum and Muhammad Zuhdi bin Mohd Rabin (left), from the Bachelor of Sports and Exercise Science programme as Hamzah, introducing the plot of Aduni. 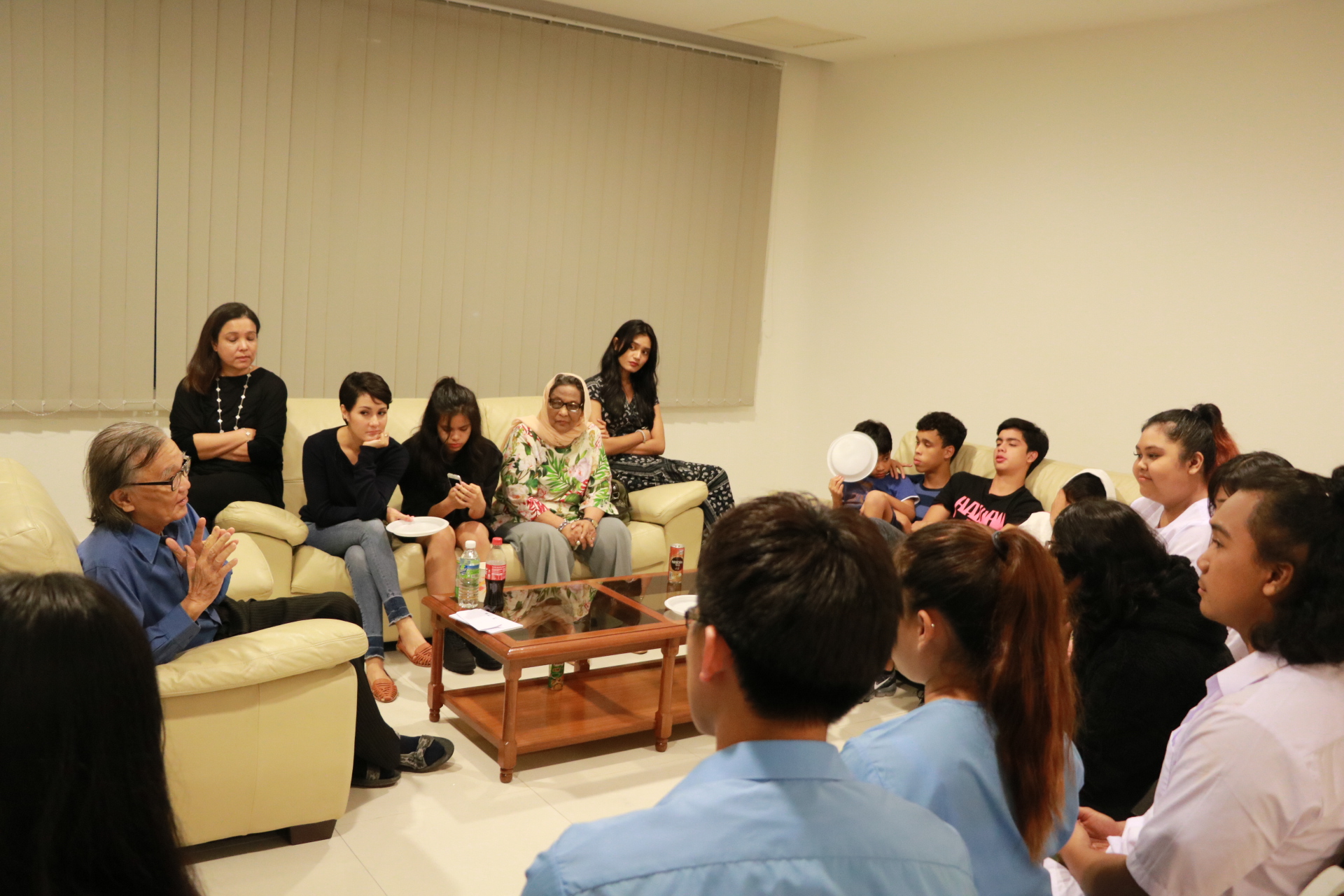 Mr Wong Phui Nam sharing his insights from the play with the cast, crew and coordinators of the production team after the show.

Written by Malaysian poet Mr Wong Phui Nam, this year’s play is an adaptation of Euripides’ Medea – a Greek tragedy which tells of a wife’s calculated plan for vengeance against her unfaithful husband, part of which also entails murdering her own children. Led by Darminaa Uthayakumar, a Year 2 Diploma in Mass Communication student and guided by En Mohd Fadli bin Zakaria, Lecturer at FSSH’s Department of English Studies, TAR UC’s production team presented a different, modern-day take, which centres around a 16-year-old girl named Aduni who is misunderstood and discriminated against, and who tries to redeem herself in a toxic patriarchal system.

“It was indeed a valuable experience for me to be able to learn how to direct a play,” shared Darminaa when asked about her experience directing for the first time. “After this, I intend to continue my journey in theatre and grow from there. If I am lucky enough, maybe this will become a fulfilling career.”

“I am proud and honoured to be given the opportunity to lead this wonderful production. It had not been an easy journey for there were many obstacles along the way, but the main objective was to expose the talented students to the world of production especially to our own Malaysian writers such as Mr Wong Phui Nam,” shared En Mohd Fadli, who also teaches subjects such as Fundamentals of Acting and Characterisation.

“Practising every day from 6pm to 9pm was tiring especially when we had assignments piling up but we would not have changed anything,” added Sheryl Ho Xin Yi, the lead actress who played Aduni.

During the opening scene, audience were transported to an eerie, green-hued scene at an abandoned school lavatory. Graffiti and rubbish littered around the stalls created an image which students were unfamiliar with.

The playwright, Mr Wong Phui Nam also attended the play on 3 August 2019 with his entire family. He took the time to share his thoughts and opinions with the directors, cast and crew of the play in a sharing session after the performance.

In tandem with the objectives of the faculty, the annual play serves to create a platform where TAR UC students can explore and enrich themselves with the wonders of the performing arts. “Aduni” is the fourth instalment of the annual play produced by the faculty, and it plans to continue its tradition of showcasing Malaysian productions.