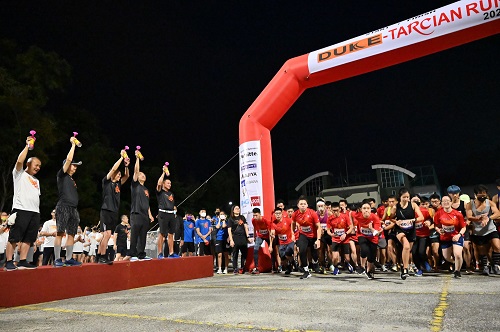 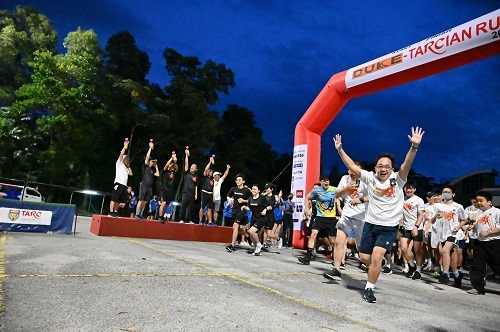 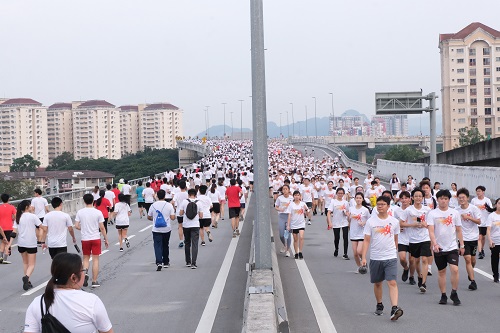 TARCians filling the SPE Highway during the DUKE TARCian Run 2022. 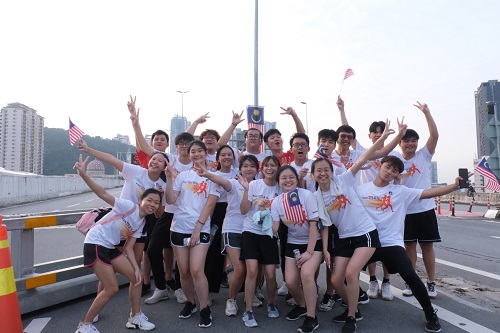 TARCians posing for a shot while waving the Malaysia flag to also celebrate the joyous Malaysia Day.

After a two-year break due to the pandemic, TAR UC campuses nationwide were once again filled with the excitement and joy stemming from participants of TARCian Run. The annually held run, well known among TAR UC students, alumni and staff, is organised by TAR UC and TARCian Alumni Association (TAA), but this year’s edition is quite special for a number of reasons. On top of being held on 16 September 2022 to coincide with Malaysia Day, this is the first time the event has a Title Sponsor which is DUKE Highway; hence this year’s run is called DUKE TARCian Run 2022. As an added bonus, this year’s runners had the privilege to run along the newly constructed Setiawangsa-Pantai Expressway (SPE) which was closed to traffic for the run.

This year’s run was also a meaningful affair for Kenneth Kong Lik Huong and his family. The TAR UC alumnus who pursued his Foundation in Science shared that the run is a great event to strengthen family bonds. “My sister is currently studying in TAR UC and when she shared that TARCian Run is back, my family and I decided to join. My dad is an avid runner, so he signed up for the 12km run while I joined the 7km fun run. My mom and sister did not run but they were excited just to be here to cheer for my dad and I. The route was quite challenging but I had a lot of fun running with my fellow TARCians. Not to mention the festive atmosphere after we came back to campus was joyful and full of life with the amazing performances by TAR UC students before the prize giving ceremony. My family and I will surely consider joining future TARCian Runs,” Kenneth shared.

Mr Lim Kok Eng in his speech during the prize giving ceremony highlighted why TAA together with TAR UC is proud of organising TARCian Run on a yearly basis. “This is our sixth time organising TARCian Run. I also have to mention that the Organising Committee faced new challenges this year as this is the first time the route for the run involves a highway and so, we had to coordinate matters with a number of local authorities. Nevertheless, we worked hard to ensure TARCian Run is held as the run has always been about bringing TARCians from all walks of life to unite for a day of fun and catching up with each other. This is the Beyond Education experience we want to continue to uphold as TARCians. I am happy to see a great turnout for this year’s run and this is a great motivation for the Organising Committee to continue TARCian Run for many more years,” he said.

A Tasteful Result at BOTC 2022