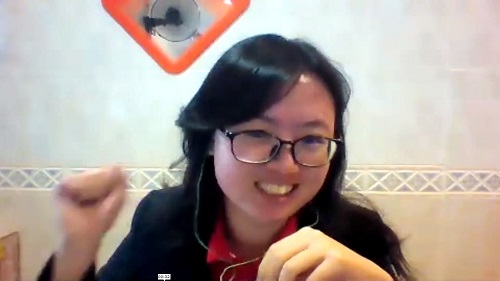 Determined to make Malaysia proud at the global stage, TAR UC student, Ashley Lim Siew Fern, is now one step closer to her goal when she was announced as the Champion in the Ernst & Young Young Tax Professional of the Year 2020 Malaysia (‘EYYTPY’), organised by Ernst & Young Tax Consultants Sdn Bhd (‘EY’) and Inland Revenue Board, Malaysia (‘LHDN’). She faced stiff competition from 9 other strong contenders hailing from among the country’s top public and private tertiary education institutions. The official announcement was made virtually on 16 October 2020. With this win, Ashley is the second student from TAR UC to have won as Champion at national level and she is qualified to represent Malaysia at the international level of the said competition.

EYYTPY is an annually held competition which seeks to encourage the next generation of tax professionals by reaffirming the growing importance of tax knowledge in the world of business and finance among university students and graduates. Competition participants are often challenged to think out of the box to produce practical and creative taxation and non-taxation solutions. Like previous years, this year’s participants were also required to present their proposals and solutions based on case studies to a panel of judges where this year’s judges were taxation experts from EY and LHDN. As this year’s competition was held virtually, participants had a steep learning curve to ensure their presentations were clear and easily understood by the judges.

“Although this was the second time for me participating in this competition, competing virtually was quite tricky. I had to ensure I presented clearly in front of the screen so that the judges understood my ideas correctly without the need for clarification which would take up the time given for the presentations.

“I am grateful for all the online sessions I attended at TAR UC ever since classes and tutorials were carried out online earlier this year. I am also thankful that what I have studied in my Bachelor of Commerce (Hons) in TAR UC is very relevant to the competition’s case studies. Besides equipping me with the necessary technical knowledge, my learning journey at TAR UC has helped me develop critical thinking skills and I am able to produce creative and impactful solutions.

“The preparation prior to the competition was also challenging as I was also preparing for my final examinations and was involved in a youth leadership programme, but I am thankful for the support and encouragement from my family and friends. My lecturers also helped me tremendously in taxation and gave valuable tips and suggestions for my presentations,” Ashley shared.

On top of this achievement, in 2019, this overachieving TAR UC student also emerged as Champion in the individual category of the Deloitte Tax Challenge which is another competitive taxation-related competition.

As the national champion, Ashley is gearing up for the international stage of EYYTPY which will commence on 10 November 2020 via virtual platform as well. Ashley also won cash prize of RM8,000, paid internship of no less than 8 weeks or conditional offer of employment with Ernst & Young member firm office in Malaysia, a trophy and certificate for having emerged as national champion.