Founded in 1923 in Brussels, FIEP is the oldest and largest international organisation which deals with Physical Education of all age categories, education, sport for all, fitness, health and physical recreation and with Olympic education. It is an independent non-governmental organisation that unites institutions and individuals from more than 130 world countries. The Federation provides a network of contacts, means of communication and exchange amongst individuals and organizations.

The broad range of events, projects and other activities organized or supported by the Federation concern scientific, technical, teaching and management aspects of Physical Education, sport, physical recreation, fitness and health.

The FIEP contributes to organization of international scientific congresses, scientific symposia and conferences, trainings and seminars for teachers, coaches and volunteers. The World International Congress of Physical Education annually held in Foz de Iguazzu, Brasil is the largest event oriented to school Physical Education in the world, with over 3000 participants every year. Since 1986 about 63000 participants from 50 countries have attended the congress. The most recent, 32th world congress, was organized in January 2017.

In Europe the 1st FIEP congress in new millennium “Physical Education in Europe – Didactic quality in Physical Education and Sport Activities“ was held in 2003 in Cáceres, Spain. Since then there has been a renewed tradition of organizing regular scientific FIEP congresses interconnected with practical courses for PE teachers. The last European congress was held in Banja Luka, Bosna and Herzegovina (2016), and the upcoming one will take place in Luxembourg (2017). The Federation has extended its activities in Asia where the first congress took place in Tokyo (2014, 2016) as well as in Africa, where the 1st Afro-European congress was organized in Rabat, Morocco (2015).

FIEP Bulletin is a professional journal that has been continuously published since 1931 including the period of World War II when other activities were suspended. This is a record among bulletins and journals with a physical education and sport orientation. The first issue 18 pages in length was edited and published by Berge von Linde in February 1931 in Swedish and French. Recent issues have had about 80 – 100 pages and have contained the articles in one of four following languages: English, French, Portuguese and Spanish. In the past FIEP Bulletin used to be published 4 times a year, nowadays it is 2 – 3 times a year. Since 2005 FIEP bulletin has been published on-line (www.fiepbulletin.net). At the moment, there are database over 3000 articles that are free to access.

The journal is edited by the editorial board to ensure that a high standard of publication is maintained. Traditionally this Board is chaired by the FIEP President. The Bulletin is distributed to all FIEP member states.

Since its origin FIEP has had a strong collaboration with UNESCO, ICSSPE, IOC and many other international sport and physical education organizations. FIEP is “Recognised Organisation” by IOC. The Federation has been a member of International Committee of Sport Pedagogy since 1984, and in 2002 it created the Alliance of Physical Education with EUPEA as a platform for a joint action to improve PE's status at schools. Some of the FIEP representatives have regularly been invited to deliver keynote presentations and to participate in significant international conferences and events such as GoFPEP, MINEPS or ICSEMIS. The Federation is involved in several global projects, for instance Designed to Move or HOPSports Brain Breaks and it signed memoranda of cooperation with a few physical education teachers' organizations and associations such as CAPDI from Italy, CONFES, Brazil or ZUTŠV, Slovakia.

In 1971 and 2000 FIEP released two manifests that significantly influenced Physical Education's development worldwide. In the mid-1960s of the past century the then president António Leal de Oliveira formed an international commission that started to prepare The World Manifest of Physical Education. The preparations were completed in 1970 and the document was released a year later in Quebec, Canada under the presidency of Pierre Seurina. In the mid-1990s of the past century the preparations of the second Manifest started under John Andrews. It was accepted at FIEP General Assembly in Foz de Iguazzu, Brazil in 2000 and consequently translated into French, Portuguese and Spanish. 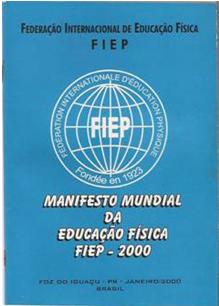 A significant activity of the Federation was the establishment of “FIEP Casa da Educação Física“ in Foz de Iguazzu, Brazil and San Luis Potosi, Mexico.  Both buildings serve for several purposes, such as different education activities, seminars, workshops, a FIEP history documentation etc. The important documents, publications, photographs, posters etc. from all over the world are archived in there. In addition, it annually serves as a museum for the FIEP world congress participants. In front of the House in Foz de Iguazzu you can find a statue of the FIEP former president Manuel Tubino to remember this eminent personality.

FIEP regularly awards the personalities who significantly contributes to Physical Education and sport' development with several awards in different parts of the world, such as Gold and Silver Cross of Honour, Thulin Award in Europe, Golden Eagle in Mexico, Jacinto de Targa Award in Argentina, Sylvio Raso Medal in Brasil and Latin America, Manuel Tubino Medal, FIEP Top Brasil, etc. Since the 1980s of the past century the Federation along with ICSSPE and Arab Sports Confederation awards best scientific works related to sport and Physical Education in Arab countries with Prince Faisal Award.

In 2009 in Latin Amerika FIEP started an online television that broadcasts most important FIEP events, interviews with its personalities and congress participants and promote its activities. The 2010 Congress opening ceremony was transmitted by satellite for all over the world. The website is available at: www.tvvirtualfiep.com.

This activity is organized once a year when selected PE teachers together with some FIEP representatives visit different places and countries in South America to give the lectures and practical sessions as well as to promote physical activity and Physical Education at schools. The project started in 2008 in Brazil and continued to Central America (2010), Mexico (2011) different parts of Argentina and Brazil (2013 – 2015).

September 1 has been designated a Day of professionals in Physical Education when different physical activities and sport competitions take place under the auspice of a famous sporting personality.

The FIEP New Leaders Programme is based on the agreement between FIEP and the Organizing Committee of the conference with an intention to enable prominent university students or young teachers to interact with a broader scientific community. The project started at the 1st FIEP Afro-European congress in Rabat, Morocco (2015) when 12 young scholars coming from 10 European countries and Morocco met after almost a year of online preparations and discussions to actively participate in the congress. A year later 8 young leaders from 6 European countries took part in the 11th FIEP European congress in Banja Luka, Bosna and Herzegovina. The next edition will take place at the University of Luxembourg in 2017.